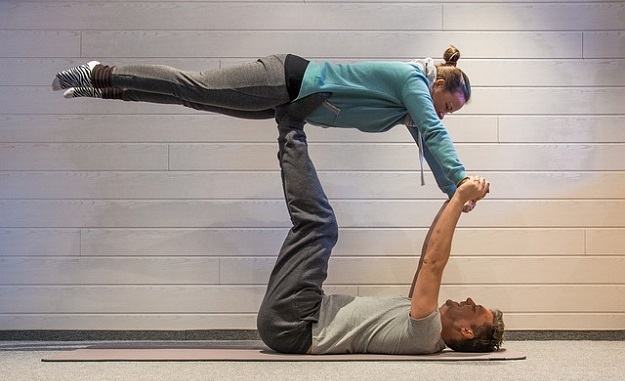 Here’s a recap of some of the strangest yoga trends of 2017!

It’s sometimes funny to me that yoga has been around for thousands of years, but there are all these “hot” modern yoga trends that everyone just has to try out… I guess it’s just our tendency to want to make what is old new again! Anyway, 2017 was no exception, and in fact, there may have been more new yoga trends than ever last year. Below are 5 of my favorites as shared on GotYoga.com – or at least, what I think are some of the weirdest and/or most fun looking – have you tried any of these?

Chime in on our Facebook page and let us know what your favorite yoga trend of 2017 was – and what you think the hottest yoga trends for 2018 will be!

Acrobatic Yoga, or AcroYoga, is one of the most famous variants of yoga, especially amongst couples that want to keep fit and improve their endurance. It’s a healthy method of spending some time with your significant other and is actually one of the least crazy entries on this list.

Aside from helping you become more intimate and strengthen the bond between you and your partner, it’s also an awesome way to relieve some stress. Sure, you’ll be doing insane poses in mid-air, but it’s relatively safe and still has the same benefits as normal yoga.

This form of yoga is done by doing a full exhale and then pulling your abs inside your ribcage to improve the strength of your core. It’s like seeing waves on the ocean, but much creepier to look at because someone is doing it with their stomach.

Yogis claim that aside from helping build your abs, it can also aid with relieving problems in digestion and keeping your hormones in check. Odd as it sounds, this is actually a part of traditional yoga and is called “nauli,” which was one of the earliest exercises taught, even before any asanas.

If you’re interested in trying it out, it’s apparently quite easy to master even if you’re a newbie in doing yoga. So, go ahead and give it a try to get rid of that holiday stomach flab!

Tantrum yoga, not to be confused with tantric yoga, is a type of yoga that asks students to scream their lungs out while doing poses. It’s insane to think that people would want something as quiet and peaceful as yoga to suddenly be full of blood-curdling screams. But hey, it apparently relieves stress along with the help of stomping, yelling—basically by throwing an adult tantrum.

The wind down of the workout involves laughing and relaxing right after, which isn’t that bad after all.

As “new” and “innovative” as it sounds, nude yoga has actually been practiced by ancient Indians, and there’s definitive proof in their books about it. It was only a matter of time before westerners found out about it and made sure it became trendy.

Yoga experts say that nude yoga is as effective as other forms of the workout because no clothes = no distractions. Doing yoga in the nude will give you a more effective workout, while at the same time, improving your self-esteem and develop a whole new appreciation for your body.

A quick search online will lead you to results for dog yoga, cat yoga, horse yoga, and even goat yoga. There’s also too many posts of people trying it out that you just have to wonder how the hell they can do yoga while having an animal buddy beside them.

Practitioners say that doing animal yoga has improved their focus, flexibility, and has helped strengthen their muscles. But still, it’s an extra challenging form of yoga, as you’ll be required to balance an animal on your body while doing different yoga poses.…

[Pose Of the Week] Full Side Plank Pose (Advanced)