Can Yoga Help with Seasonal Depression? 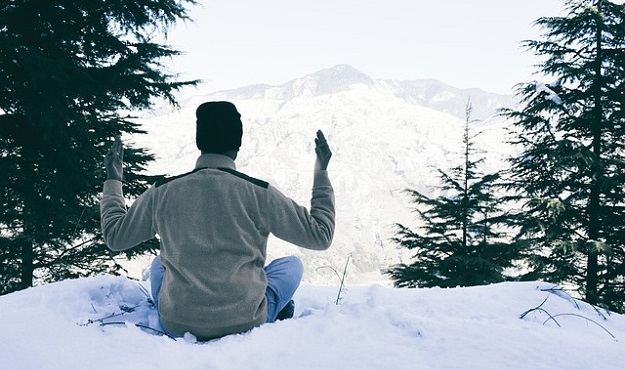 Feeling blue for no reason? You could be suffering from seasonal depression – and yoga may help…

If you’re feeling a bit “SAD” this time of year, you’re not alone. Seasonal depression – also known as Seasonal Affective Disorder – or SAD – affects millions of Americans, particularly women. The good news is, yoga may help.

Although there has not been a lot of research done on how yoga affects SAD, numerous studies about yoga and other forms of depression suggest that yoga may have have a positive effect on the symptoms of seasonal depression as well. Yoga can help lighten your mood, boost your energy, and keep your body moving, as well as easing symptoms of PMS, which is also linked to SAD.

According to this article, here’s why yoga may be helpful when dealing with seasonal depression:

Yoga may work by affecting the level of serotonin in the body, says Timothy McCall, MD, Yoga Journal’s medical editor and the author of Yoga as Medicine. In his book he cites research showing that people suffering from depression who did yoga experienced an increase in serotonin and became more sociable. Though the study wasn’t focused on SAD, McCall does say that things that work for other kinds of depression are likely to work for SAD.

And some studies have raised other explanations for this effect. A paper in the journal Medical Hypotheses, for instance, suggested that the pineal gland, which converts serotonin to melatonin and helps regulate the body’s circadian and seasonal rhythms, might actually be what the ancient yogis identified as the crown chakra.

Though there’s been no research on this, the paper’s author, psychiatrist Eric Leskowitz of the Spaulding Rehabilitation Hospital in Boston, speculates that the energizing effects of yoga and of specific breathwork aimed at this chakra may help get those rhythms back in sync.

“Whether you look at it as the crown chakra or the pineal gland, they both relate to how we connect to the cosmos,” Leskowitz explains. “It doesn’t matter if you’re talking about being connected to the sun and the stars spiritually or in our seasonal rhythms.”

However yoga affects the body, it also teaches you about the workings of your “monkey mind.” In particular, you learn how to handle dark feelings that might otherwise overwhelm you.

“Learning to witness your feelings without getting wrapped up in negativity is a big part of yoga,” says (yoga therapist) Karen Lee. “And yogic mantras can help people focus on the positive. Both are important.”

As for what type of yoga is best for PMS and SAD, Lee suggests Pranayama followed by restorative poses. Leskowitz says that Kundalini Yoga’s breathwork and some seventh-chakra-oriented poses in hatha yoga, such as Headstand, may also improve SAD symptoms. And some women find that practicing before dawn, perhaps by the light of a few candles, can be a gentle way to start the day.

Whatever you choose, McCall suggests practicing at least a few minutes each day. One key finding of the research he cites in Yoga as Medicine is that yoga’s effects appear slowly but are long lasting.

“You change brain architecture by repeating actions again and again, which strengthens the links between brain cells,” he explains. “The best way to forge and strengthen new neural pathways is to practice every day. It can be as little as 5 to 10 minutes, though you’re likely to get greater benefit if you do more. So I’d say start with a small amount and, if you can maintain it, increase slowly over time.”

With any luck, you’ll feel energy bubbling up from within and be ready to face your day, clouds and all!

Exploring the 5 Koshas of Yoga