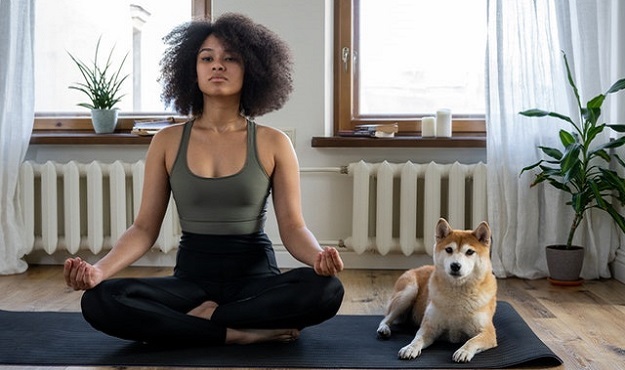 Have you heard any of these common yoga myths? It’s time to set the record straight…

Yoga has definitely made its mark on American culture in recent years; in fact, in 2020, about 16% of all Americans practiced yoga on a regular basis according to Statista, and one 2019 survey found that 67% of adults in the U.S. have tried yoga at some point.

Given its popularity, it’s no surprise that there is a lot of misinformation out there about yoga. From “you need to be thin (and white) to do yoga,” to yoga being a tool of the devil to tempt you away from following God (yes, I actually heard someone say that once!), there are many yoga myths out there – and to make it even more confusing, some of them are contradictory. Below are a few common misconceptions about yoga – and a more realistic explanation of the facts.

1.) You Have to Be Flexible to Do Yoga

“You don’t have to touch your toes to practice yoga. If you want to touch your toes, bend your knees,” says Kelly DiNardo, a 200-hour Registered Yoga Teacher (RYT), owner of Past Tense yoga studio in Washington, DC, and the co-author of Living the Sutras. “Whether or not you’re flexible should not dictate whether you practice. Over time, yoga can help you become more flexible—that’s why we call it practice—but you don’t have to be Gumby-like to start. Flexibility is a result of yoga, not a prerequisite.”

2.) Yoga Is for the Thin, Young, and Beautiful

The image of yoga in America is of thin, bendy, beautiful young women flocking to studios and beaches to complete pretzel-like body contortions that they then post to social media. The image is attractive, of course, and it’s certainly helped inspire an interest in the practice of yoga, but it’s a misleading representation of the true image (and intent) of yoga.

“It pains me to think that people are intimidated to go to yoga based on what they see online,” says Jenay Rose, a 500-hour RYT, online fitness coach and wellness influencer. “Yoga is for you, me, our sisters, brothers, nephews, grandparents. Yoga is for all. In fact, yoga means union.”

According to the 2016 Yoga in America survey, only 19-percent of American practitioners fell into the 18-29 age bracket, with the vast majority of practitioners over age 30, and 38-percent of them falling into the “50+” category. (1)

Regarding the “thin” misconception, it’s just flat-out wrong. You do not have to be thin (or conventionally beautiful) to practice yoga—yoga is inclusive and welcoming, and as Rose pointed out, it’s a practice for all. Just check out the rockin’ Instagram pages of yogis like Jessamyn Stanley and Amber Karnes who prove yoga is accessible for anyone at any size in truly epic fashion.

For the uninitiated Westerner, there’s a lot about yoga that may appear “religious,” and certainly, there’s a spiritual element to the practice, but it’s important to understand that yoga itself is not a religion.

“I hear this yoga myth a lot among Christians,” says Brad Ormsby, of Freedom Genesis, a yoga and meditation blog. “This comes from yoga’s Indian roots where mantras and chants have been used for many years. They’re meant to bring focus and help you awaken internally, but they’re not required to practice yoga.”

And even if you decide to join in with the mantras and chants, you’re not “converting to yoga” as if you were converting to a new religion. “There’s a spiritual element that encourages you to connect with a higher power, but it’s non-denominational, so you can do yoga as a practitioner of any religion,” says Christa Fairbrother, a 500-hour RYT and the owner of Bee Content Yoga.

4.) Only Vegetarian Hippies Do Yoga

It’s true that yoga is a practice that encourages self-awareness, love, and connection with the world. As practitioners become more mindful and conscientious of their actions, many do make choices that seem “hippie-like” to the outside world.

According to the 2016 Yoga in America survey, half of yoga practitioners do say they “live green, eat sustainably, and donate time to their community”(1)—all positive attributes, by the way—but that means half don’t claim to do those things. So let the record state, there is no requirement for yogis to give up meat, join a commune, or stop using commercially-made deodorant.

5.) You Shouldn’t Do Yoga During Pregnancy

While it can feel difficult at times, exercise is good for a healthy pregnancy, and yoga is considered a safe and low-impact option for moms-to-be, as long as you practice safely.

“Yes, you should do yoga during pregnancy, but with caution,” says Simone Tucker, MS, a 200-hour RYT and Exercise and Sport Science Instructor at UMHB. “During pregnancy, and to a lesser extent during menstruation, the female body produces the hormone relaxin. Relaxin’s function is to prepare the body for the upcoming delivery by relaxing, or making your muscles, connective tissue, and joints more flexible. While this leads to a greater range of motion, it also makes it easier for expecting mothers to overreach during yoga practice, possibly leading to injury.”

Tucker emphasizes that more experienced yogis should listen closely to their bodies and stay within their pre-pregnancy limits during each practice. New yogis should take a more proactive approach to safety, as they may not know what their limits are. Tucker says they should work with a qualified yoga instructor and may want to attend specific prenatal yoga classes.

6.) You Need Expensive Tools and Apparel to Do Yoga

Sure, you can head to lululemon and stock up on name-brand yoga apparel, gear, and accessories, spending hundreds (or even thousands) of dollars, but there’s absolutely no reason to go broke to start a practice.

“You do not have to have the right look or clothes to go to yoga. That’s absurd,” says Val Minos, a 200-hour RYT and the creator of Alt-Yoga Vibe. “Yoga isn’t about the look, it’s about moving the breath through the body and finding a deeper connection with self.”

To be clear, you can do that while wearing anything you want, whether it’s comfy pajamas or the athletic gear you already have on hand. Not to mention, most yoga studios have mats you can rent and props you can borrow, so there’s really nothing for you to spend money on before your first class.

“I’ve never seen a ‘No Boys Allowed’ sign on a studio door,” says DiNardo. “In fact, yoga was started by men. Historically, some of the greatest yoga teachers have been men.” And today, more and more men, including LeBron James, Evan Longoria, and Tom Brady practice yoga.

If you’re still not convinced yoga is a “manly” enough activity for you, take a cue from a 6’6″, 240-pound, former division 1 football-player and check out Gaiam’s Athletic Yoga DVD. It features Kevin Love, a professional basketball player, doing the flow. Seeing Love wobble through the practice may give you the confidence you need to keep working on your own skills.

And here are a few more from Wellness Living…

8.) Yoga is Just Stretching, Not a “Real” Workout

This one is a rumor clearly started by someone who hasn’t attended a yoga class themselves. Modern yoga…combines physical strength and core engagement. If that isn’t a workout, we don’t know what is!

While it’s true that there is no weight lifting or traditional cardio involved in modern yoga (although it is a great form of weight-bearing exercise and can also be quite cardiovascular), it’s a test in coordination, strength and balance. There’s also the fact that you may very well be using muscles you haven’t trained before – that definitely adds an additional challenge to the workout!

And we haven’t even covered the part of the workout that exercises your mind and spirit! Yoga is the practice of patience, peace and fortitude. It’s definitely not just stretching, it’s a focus on strength – both of the mental and the physical varieties.

Also, can we talk about the classes themselves? Most live classes are 60 to 90 minutes, and they are quite an endeavor. If you think you won’t be sore, tired and sweating all over your mat, think again.

This is one of those yoga myths you can easily debunk for yourself – just sign up for a class and see!

9.) The More Difficult the Pose, the Better

Some beginners are hesitant to try yoga because they are afraid they aren’t flexible or strong enough to do certain poses. This stems from the belief that to be good at yoga, you have to be able to do the Insta-worthy poses. And that the harder the pose, the better you must be at yoga.

This is a perfect example of how yoga myths and misconceptions can play on your insecurities, discouraging you from trying something you might grow to love! We know that some poses can be intimidating, but they don’t need to be. Although yoga is usually practiced in a class setting, it is a personal habit. The importance of introspection and awareness is paramount, with patience and physical strength coming in second.

This is one of the many yoga myths that is easy to dispel. It’s often believed that all yoga is the same.

In actuality, yoga is not a single practice. From Hatha yoga, to Bikram yoga, to Kundalini yoga, and so much more – you’ve got a lot of options to choose from. Not only that, but you can try a yoga class anywhere from gyms to dedicated yoga studios these days. Different atmospheres, class sizes and class types can make a world of difference to your experience.

Have you tried yoga and decided that it’s just not for you? Gone to a class and come away disappointed? Don’t stop after one – or even two attempts – keep trying, chances are you’ll find your type!

Most importantly, don’t let these yoga myths keep you from experiencing the many wonderful benefits that yoga can bring to your life! Give it a try, and if it doesn’t seem like it’s for you, maybe try a different class, instructor, or yoga style until you find one that suits your needs, goals, and personality.

Exploring the 5 Koshas of Yoga

5 Celebrities You Would Never Have Guessed Do Yoga